Legend of the Five Sons of Carcassonne 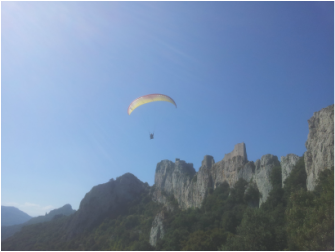 Peyrepertuse or Pierced Rock, is a castle with several tales to tell. Dating back to the 11th Century, the Kings of Aragon, built the lower castle, the higher castle was added by French King, Louis IX after the lands were ceded to France.

The so called Five Sons of Carcassone, were the castles of Peyrepertuse, Queribus, Termes, Puilaurens, and Aguilar, sworn to defend the Southern Borders, against the Spanish ( at that time, the border was roughly speaking the border we know today as the dividing line between Aude and the Pyrenees Orientales )

Never short on intrigue, Peyrepertuse was never placed under siege during the crusades, as it's Lord and Master, Guilhem de Peyrepertuse, having been excommunicated for refusing to recant to the Catholic Church, surrendered the castle following the fall of Carcassonne.
Following the conclusion of the Crusades, Peyrepertuse, never shy of an intrigue, provided safe refuge to Henri de Trastamare - no French dignitary - but the heir apparent and claimant to the throne of Castille !

Following the re-drawing of the borders in 1659, Peyrepertuse's key stragic important declined, and following the French Revolution, it was abandoned completely.